The Fonteva 21Winter release wraps up security improvements introduced in 20Spring.1 and introduces new Multi-Currency functionality as a Beta release.

In the previous 20Spring.1 release, Fonteva introduced users to Sharing Sets. Sharing Sets allow administrators to give access to records in the system to Community Portal users that are Contacts in the database. As part of the 20Spring.1 update, you configured Sharing Sets for your org. You can review those steps here.

To resolve this issue, Fonteva is deprecating the Event Master-Detail relationship in 21Winter and replacing it with an Event lookup relationship. This makes it possible to include the Attendee object in the necessary Sharing Set(s) and give the Attendees and Group Registration Owners the ability to view and manage their Attendee records for any Event.

Fonteva has provided a 21Winter Pre-Update Guide with directions for preparing ahead of the release to delete the old Event Master-Detail field and replace it with the new Event lookup field. This way, users can jump right into the Update Checklist in the 21Winter Release Notes and update to 21Winter when ready.

Sharing Sets must be configured prior to completing the 21Winter Pre-Update Guide, and your org should be updated to 20Spring.1 or later.

Multi-Currency is a Beta release in 21Winter to allow the global Fonteva User Network to explore the functionality in their Sandboxes prior to general availability later this year. While Fonteva customers are encouraged to test the Beta feature in their Sandbox environments, bugs and feature gaps will not be patched by the Product Team until the general release. If a product issue is found during a test or trial use, customers are encouraged to create cases via the FUNcommunity so any fixes can be incorporated into the general release. The Fonteva Product Team is actively engaged with a selection of Beta trial accounts to ensure a thoroughly tested general release.

Fonteva’s Multi-Currency Beta resolves that issue by allowing users to set one Reporting Currency on the Business Group and multiple Functioning Currencies on the Store. When the Multi-Currency Critical Update is enabled, Community Portal users can choose from any of these currencies using the new Currency Picker. 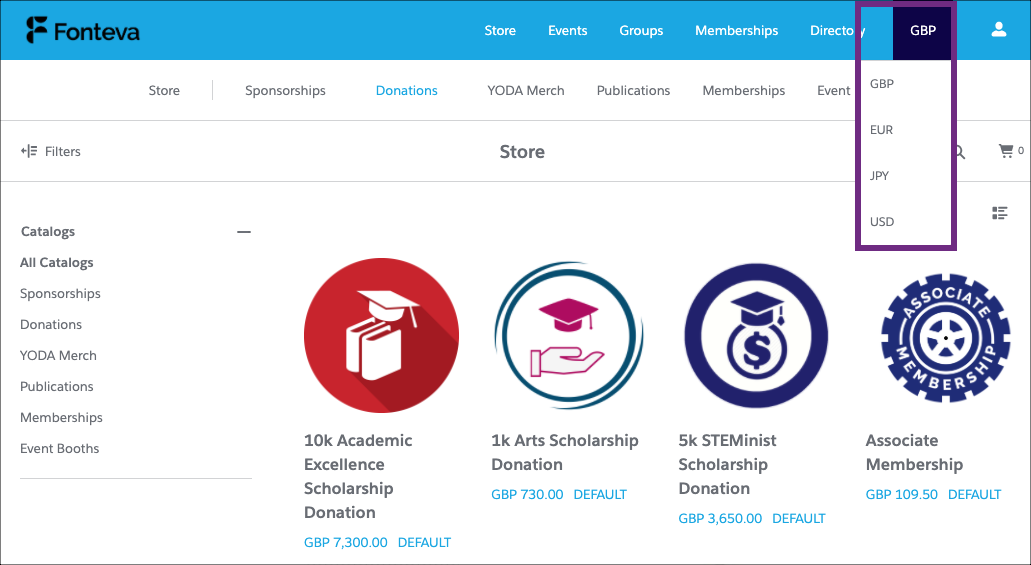 A number of features have been developed to help staff users convert and manage currencies in the org.

In addition, staff can perform currency conversions in Rapid Order Entry and the Order Summary Builder.

There are some new terms you will encounter when Multi-Currency is activated in your org. We’ve provided a table below so you can get a head start.

Please note, these errors can depend on your browser setup. Learn more